A new study reveals that a shrunken South American head has been confirmed as real human remains and not as a counterfeit.

New CT scans show that the shrunken 3.3-inch head, donated to a museum in Canada in the 1940s, is authentic and was once the head of a Peruvian Indian woman.

Shrunken heads or “tsantsas” are cultural artifacts produced by some indigenous cultures of Ecuador and Peru until the mid-20th century.

Tsantsa were believed to contain the spirit and knowledge of the individual from which they were produced, and therefore were thought to hold supernatural power that could be bestowed upon the owner.

However, some convincing counterfeit shrunken heads, made from animal body parts or other alternatives often used in commercial reproductions, make it difficult to tell the true from the fake.

Commercial tsantsa were often made from animal skins, including pigs, monkeys, and sloths. 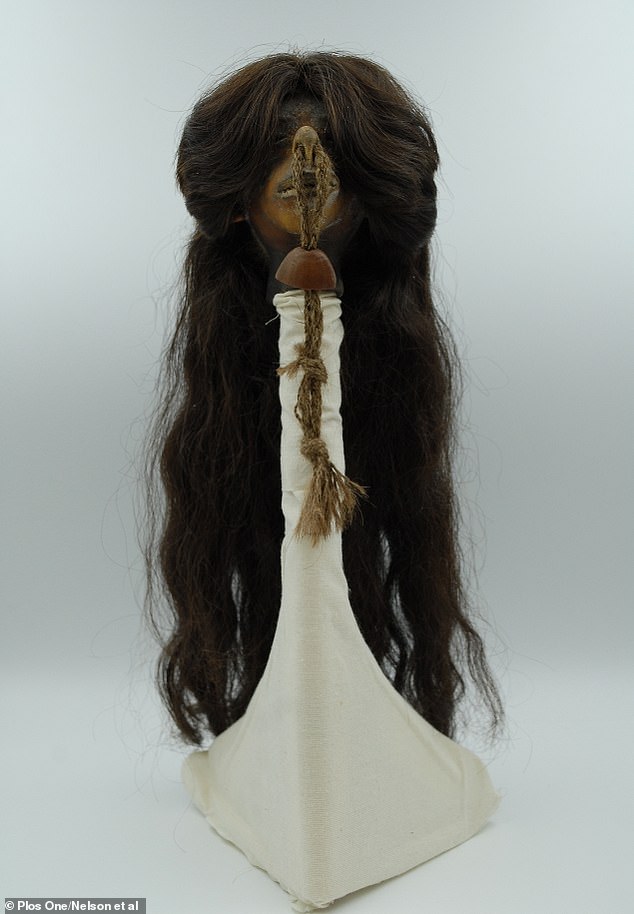 South American shrunken heads, some known as tsantsas, are common in many museum collections. However, it is currently difficult to identify whether they are authentic, including whether they were created from human remains. Researchers studied the tsantsa currently held in the collection of the Chatham-Kent Museum in Chatham, Ontario, Canada (pictured).

Tsantsas (shrunken heads) are cultural artifacts produced by some indigenous cultures of Ecuador and Peru until the mid-20th century.

Typically made by men in an elaborate, multi-step process, shrunken heads are made from the skull skin of enemies killed in combat.

Tsantsa were believed to contain the spirit and knowledge of the individual from which they were produced, and therefore it was believed that they held supernatural power that could be bestowed upon the owner of the head.

Using clinical computed tomography (CT) and high-resolution micro-CT scans, the researchers were able to determine that the tsantsa currently held in the collection of the Chatham-Kent Museum in Chatham, Ontario, is actually real remains. humans.

“Digital archeology, including computed tomography, provides a whole new dimension of validity and renews the field by making it much less invasive.”

Researchers don’t know how old the “Chatham tsantsa” is, although they say it probably dates back to several centuries ago.

Typically made by men in an elaborate, multi-step process, tsantsa were made from the skull skin of enemies killed in combat.

The gruesome process involved making an incision in the back of the head, peeling the skin and hair off the skull, and soaking them in hot water and hot sand.

Tsantsa are thought to have been created as early as the 1500s, to trap the soul within the remains, as the eyes and mouth were sewn up, the researchers say.

By cutting down the head of a fallen enemy, the victor was believed to harness their spirit to servitude and prevent the soul from avenging the enemy’s death.

Tsantsa were used in ceremonial rituals where the power of a given shrunken head could be transferred to a family.

After the ritual, supernatural power was believed to have left the shrunken head, at which point the tsantsas itself originally became nothing more than a memory.

However, the influence of European and colonial visitors in the nineteenth century saw post-ceremony tsantsa acquire commercial value, with their owners willing to trade them. 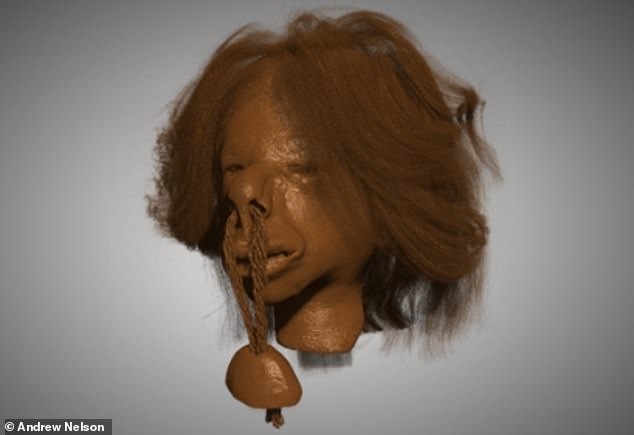 New CT scans show that the shrunken head donated to a museum in Ontario in the 1940s is authentic and was once the head of a Peruvian Indian woman. In the photo, a 3D rendered image of the micro-CT scan of the tsantsa

The demand for curiosity soon outstripped supply, resulting in a market for inauthentic tsantsa, some made from human remains, others from animal heads or synthetic materials, for export to European and North American buyers.

This particular tsantsa was donated to the museum in the 1940s by a local family, after it was purchased during a tour of the Amazon basin.

The original membership record lists the tsantsa as originating from “Peruvian Indians” in South America and nothing else, which is not unusual, but this was not enough to definitively determine whether it was real or counterfeit.

But the team knew they were looking at human remains when examining eyes, ears and hair using high-resolution micro-CT scans.

“You can see the individual skin layers on the clinical CT scan, but on the micro-CT scan you can actually see the individual follicles and it becomes really clear what is going on,” said Andrew Nelson, president of Western anthropology. 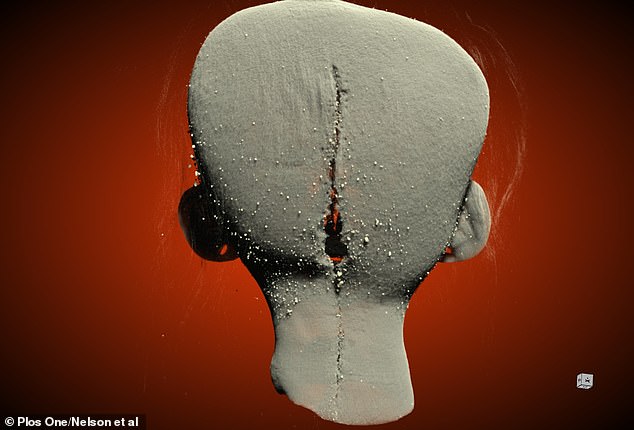 The micro-CT image shows the incision in the back of the skull, windowed and leveled to remove hair

The seams used to close the incisions, as well as the eyes and lips, can also be critically examined only using a micro-CT.

Although the team obtained conclusive evidence that the tsantsa is human remains, they were unable to determine whether the purpose of the head shrinking was ceremonial or commercial.

Further studies on the materials used to seal the eyes and lips could reveal more.

“If the materials of the vine were used to seal the eyes and lips, it would likely identify the tsantsa as ceremonial, but if a more modern and cheaper thread were used it would be more indicative of commercial interests when it was made,” Poeta said.

Researchers won’t know for sure the details and ultimate purpose of building the shrunken head until more tsantsa are examined – those that are guaranteed to be ceremonial and those that are expected to be fakes.

“We always work respectfully and intentionally with our research subjects and look forward to working with our Ecuadorian colleagues, including Shuar and Achuar, to lead any future work,” said Poeta.

The results were published today in the PLOS One journal.

HOW THE REDUCED HEADS WERE MADE

The ceremonial shrunken heads were crafted in an intricate, multi-step process that has been passed down from generation to generation from father to son.

The process began by taking the corpse of a defeated opponent and removing the head as close to the shoulders as possible.

The skin at the base of the neck would be carefully pulled back and separated from both the skull and muscles, and from the tissues beneath the skin.

The separate outer layers of the skin – the epidermis and dermis – were then flipped to allow closure of the eyelids, mouth and head-to-neck incision from the inside using plant-based fibers.

Once this was done, the head would be turned “right out” again and first placed in cold water before being simmered, which would reduce the head to about a third of its original size.

The hollow meat would then be dried by first dropping hot stones into the head through the neck opening and then, as it shrunk further, hot sand.

During this process – which saw the head shrink to a fifth of its original size – the skin was manipulated by hand to ensure that the hot material inside was evenly dispersed to ensure even tissue contraction.

At the same time, the hot flat stones would be used to smooth out the outside of the face, healing the skin while at the same time burning away the light vellus hairs that cover the face and can be dramatically emphasized by the shrinkage.

The ashes would also be stained on the skin to darken his complexion.

The ceremonial tsantsa was completed with smoking over the fire and with a rope attached to the top of the head from which it could be hung.