Africa is no longer the most Internet-censored region in the world, according to a study by Surfshark created in collaboration with NetBlocks, the Internet watchdog.

The report from the cybersecurity firm indicates that internet shutdowns are down by 14% in the first half of 2022.

The report reveals that Africa has been one of the areas most affected by internet censorship by the proportion of the population over the past 7 years. 8 out of 10 Africans have felt the internet and social media shut down. 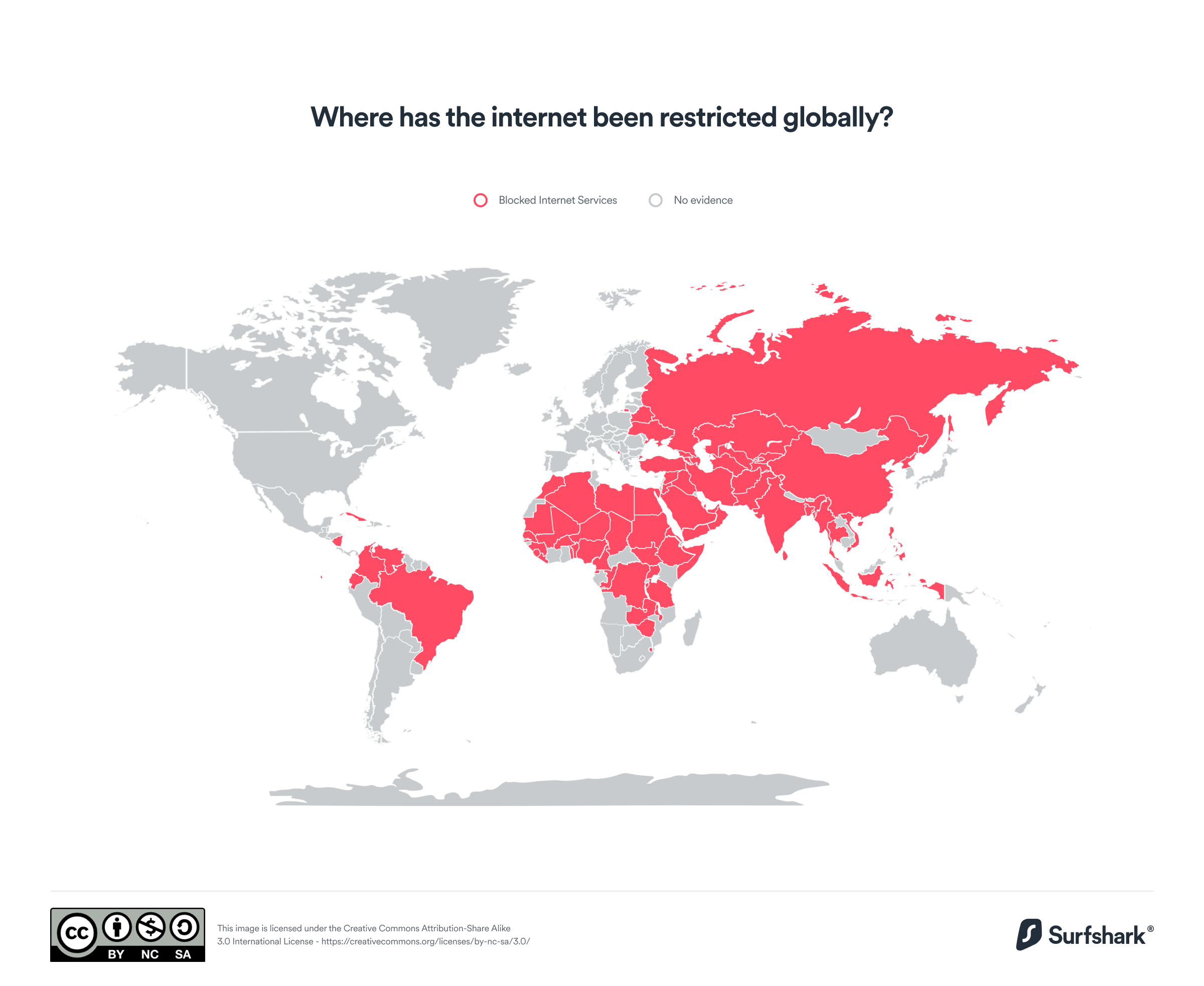 Cases of internet restrictions fell by 14% worldwide in the first half of this year, from 84 in the second half of 2021 to 72. Internet outages and restrictions were recorded in 10 countries, 85% from India and the Jammu and Kashmir region, making Asia the continent leader in Internet shutdown, “the report reads.

The continent is also a leader in terms of social media outages over the seven-year period. Out of 72 internet outages in 2022, social media platforms were targeted six times: two in Europe and Africa and one in Asia and South America. Despite a decrease in cases, new internet outages affected more citizens in the first half of 2022: 1.89 billion people compared to 1.54 billion in the second half of 2021.

“We see a positive trend in internet restriction cases easing this half of the year. However, the number of countries using internet outages as a weapon to silence citizen unrest remains worryingly high. Most cases are national or local in which the internet is slowed down or completely shut down, leaving people without most of their media, ”says Agneska Sablovskaya, Surfshark’s lead researcher.

In the first half of 2022, Surfshark experienced 66 internet blackouts in six countries and territories: Burkina Faso, India, Jammu and Kashmir, Kazakhstan, Pakistan and Sudan. The internet was shut down locally in three countries and territories (India, Jammu and Kashmir region and Pakistan). In comparison, three countries (Burkina Faso, Kazakhstan and Sudan) have chosen to reduce internet connections nationwide, even if this harms the economy the most.

It also revealed that Asia is the most censored region in the world, with 85% of internet shutdowns (61) occurring in India and the Jammu and Kashmir region, twice in Burkina Faso and once in rest of the affected countries. Therefore, Asia was considered the most censored continent in the world for the past six months.

“The slight decrease in nationwide internet closures observed in early 2022 follows an unprecedented period of internet addiction during the pandemic. Yet this is no respite: the general decline of freedoms continues around the world, which is why it is essential to monitor and support human rights and democracy in the digital sphere, “said Alp Toker, CEO of NetBlocks, the global organization. of Internet surveillance.

Research shows that cases of social media censorship this year have spread to all continents. In the first half of 2022, Surfshark recorded six incidents in 5 countries: Brazil, Burkina Faso, Sri Lanka and Zimbabwe all shut down their social media once and Russia twice, with one case still pending. The most common reasons for the censorship were political unrest and protests.

According to Surfshark’s study, 5.7 billion people in 76 countries have been deprived of internet access since 2015.

If we look at social media, in the first half of 2022, the most commonly restricted social media app was Facebook. 46% of the world’s population has been affected by the Facebook restrictions imposed by the government over the past seven years. Twitter and WhatsApp follow the app, the latter being the most censored Voice-over IP (VoIP) app. Governments have also targeted Instagram, Telegram and YouTube.

Currently, 16 of the 196 countries and territories analyzed are restricting access to social media or voice-over IP (VOIP) services. Most of the ongoing restrictions (12) are registered in Asian countries.

Support us by following us on Google News tor make sure you don’t miss any future updates.